Once upon a time long, long ago—in the 1960’s—a little girl named Suzi, her mother Wilma, and her grandparents decided to go for a Sunday afternoon picnic in the mountains of East Tennessee. It was late summer in the city near the mountains where Suzi’s grandparents lived in a small, square house with only a noisy electric fan in the window to help them through the hot and humid days.

Suzi’s granny, Eileen, made special-recipe fried chicken and her grandaddy, Manly, packed the car with the picnic basket, picnic blanket, and heavy fold-up wooden chairs. He put all these things in the trunk of the car so that Suzi, her mommy, and her granny had lots of room to sit inside. They needed lots of room because Suzi always brought her ‘friends’ with her on picnics: a tall baby doll with yellow hair, a monkey sewn from old socks, and a boy named Albert, whom no one else could see but who took up the whole middle seat in the rear of the car.

Granny used the big, square Sunday picnic basket (not the little round one she used for Saturday afternoons at the park across the street from the factory where she and Grandaddy worked together).  The big basket carried plates and cups, forks and spoons, and the best fried chicken in the whole world, which Granny cooked in a cast-iron skillet that was too heavy for little Suzi to even lift. She also made baked beans, potato salad, butter biscuits and deviled eggs. Suzi liked all the picnic foods, but she could not understand what the devil had to do with making the eggs, and she was afraid to ask!

On picnics in the woods, Suzi loved the tall trees for shade, the cool grass to sit on, and the cold shallow stream to play in. She and her grandaddy often waded into the stream together to find smooth, flat stones that she could skip across it just the way he showed her. Later, she taught Albert how to skip stones too.

Grandaddy always picked just the right spot for their picnics. He knew all the best roads that led into the forest beside the rippling creeks of clear water. He had been visiting these woods for many years—long before his wavy black hair and mustache turned gray. In those days long ago, he often borrowed his older brother Earl’s jalopy to bring Eileen here for picnics before they were married and before Wilma and little Suzi were even born. In those days, the mountain roads were very narrow and mostly made of rocks and dirt, but the woods were as beautiful and peaceful as they are today.

Grandaddy was happy now as he drove to a favorite picnic spot for his family. He pulled the car onto a short dirt road and then onto the thin grass just under a mountain laurel tree with its hundreds of shiny green leaves and bright white flowers. The picnic table was only a little distance away, so Grandaddy opened the trunk of the car and put the picnic basket out on the table while Suzi and her mommy spread a quilted blanket on the grass between the car and the mountain stream.

Afterward, Suzi and her grandaddy walked over to the cool stream, took off their shoes, and waded up and down in the shallow water. This part of the picnic was Suzi’s favorite. She liked to search for baby fish darting about in the deeper water where the river rocks were smooth on her feet.

Sometimes on picnics, Grandaddy liked to play tricks on his granddaughter when she wasn’t watching him. One time she found a red worm in the pocket of her jacket after she had left it on the creek bank to go wading! And, another time, Grandaddy put a sticky salamander on her sandal!

This day, just as Suzi was getting out of the stream, Grandaddy came up next to her from the opposite side. He was running bent over and trying to get his shoes back on all at the same time. Suzi thought he looked funny and wondered if he might be trying to play a trick on her.

“Hurry to the car and get inside,” Grandaddy urged her.

“But why are we leaving?” little Suzi asked suspiciously.“We haven’t had our lunch yet.”

“I know,” Grandaddy said as calmly as he could manage, “but there’s a bear walking up the stream from the woods, and we need to get back in the car right now.”

As he said this, Grandaddy grabbed Suzi by the hand, and started taking long, quick steps away from the bear and toward the car. She and Albert could hardly keep up.

“Wait for Albert,” she said, but Grandaddy didn’t seem to hear.

Grandaddy gathered up Granny and Wilma sitting on the blanket near the car, opened all four doors, and put everyone inside before he jumped into the front seat. But when he reached up to the ignition, the keys were not there, and he couldn’t find them in his pants or shirt pockets either! He didn’t know where the keys were until he looked back at the picnic table and saw them lying next to the basket where he had left them earlier.

Grandaddy got back out and was heading toward his car keys and the basket when he saw the bear again, but much closer this time. The hairy beast ambled out from behind one of the laurel trees at the edge of the picnic area and headed straight for their table! Just then, he heard his daughter Wilma calling out to him:

As she said this, Wilma was sitting sideways in the back seat putting her sandals back on her bare feet. But before she could get them buckled, she saw that Granny was already outside the car again and running toward the picnic table! Suzi had never seen her granny actually run before, so she stood up in the back seat to get a better look. And there she was, speeding toward the picnic table with her yellow cotton sun dress swirling about her knees as she went. No question about it, Granny was running—and fast.

Suzi and her grandaddy watched in amazement as Granny raced the lumbering bear to the picnic table, scooped up the basket of fried chicken in her arms, and jumped back in the front seat even before Wilma could get her sandals on and before Grandaddy could come to his senses and cry out, “Wait! Get the…”

The bear looked annoyed when he reached his side of the picnic table. He huffed and sniffed and then realized that the fried chicken he first smelled from down stream was now missing. The birds stopped chirping and the squirrels stopped scolding as the big black bear loudly rattled through the metal trash can next to the picnic table. Finding nothing there, he laid his pudgy paws up on the table and stared down in sad disappointment, because, as we all know, bears only want one thing—Food!  Next, the bear sniffed the top of the picnic table again, then sniffed the air around the table, and, finally, with his beady black eyes, began to stare in the direction of Granny inside the car.

“Start the car and let’s go!” Granny said to Grandaddy in a fierce whisper.

“I can’t,” Grandaddy said back, while keeping track of the bear at the same time.

“Why not?” asked Wilma from the rear.

Grandaddy pointed to the picnic table and said only two words: “Car keys.”

“It’s OK,” Granny replied. “I put the extra set of keys in the picnic basket in case we got locked out.”

And that’s when they realized all at once that, in her haste, Granny had left the picnic basket on top of the car when she jumped in and slammed the door behind her!

Now the bear was staring at the roof of the car. His nose had found the fried chicken—warm, salty, and sweet all at the same time—even before he actually spotted it just above Granny’s head. It didn’t take the bear any time at all to get from the table to the car, so no one had time to get out before he stepped up on the front bumper to get a better look. His heavy paws made the car rock a little and his long claws made a hard scratching sound that made Suzi and her mommy very nervous in the back seat. It made Albert nervous too, but only Suzi could see his lower lip quivering.

But, really, he did not need to say it, because everyone in the car was already frozen in place. Suzi noticed that Grandaddy’s knuckles showed white where he was gripping the steering wheel, and Granny sat ramrod straight in her seat, afraid to move anything but her eyes. But, then, as the bear walked paw over paw up the front fender on Granny’s side, she scooted over closer and closer to Grandaddy behind the steering wheel, until he worried they might both pop right out the car door.

Just outside the windshield, the bear stood up on two legs, reached up with one paw, and dragged the picnic basket off the roof and down behind the car where the quilted blanket still lay on the ground. And there he sat down, picking fried chicken, butter biscuits, and deviled eggs out of the basket while everyone waited in the car, scared and wondering what to do next.

Suddenly, Granny couldn’t stand it any longer. She reached across Grandaddy’s lap, opened his door, and pushed past him even as he tried his best to grab onto her. Slipping out of his grasp, she swung around the door, snatched the car keys off the picnic table, and got back inside before the bear even noticed. In fact, the bear never did notice, because he had his snout buried in the fried chicken and couldn’t be bothered.

Grandaddy looked astonished all over again. As soon as Granny was back in the car, he took the keys from her hand, started the car and spun the tires to get his family away from that hungry bear. But even with the car kicking up gravel and dirt all around it, that big ol’ bear just sat on the blanket on the grass next to the creek shoving fried chicken in his maw with his great greasy paws.

And that’s how the bear got its picnic.

How can a little girl have a picnic in the woods

If a bear shows up and steals the fried chicken?! 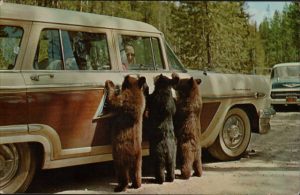 "Age is an issue of mind over matter. If you don't mind, it doesn't matter." -- Twain "Success is going from failure to failure without losing your enthusiasm." -- Churchill "Give a man health and a course to steer and he'll never stop to trouble about whether he's happy or not." -- George Bernard Shaw View more posts